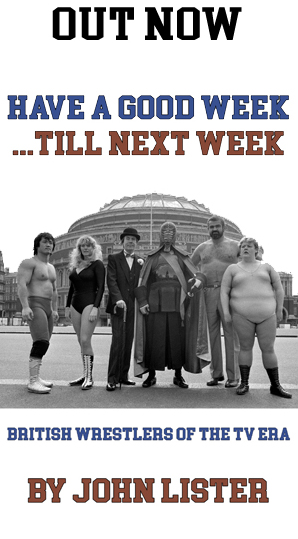 This site is an ongoing project to list all the matches aired by ITV between its first airing in 1955, and 1988 when Greg Dyke cancelled British wrestling broadcasts. The listings are taken from sources including the TV Times and include match descriptions where originally listed plus results where available. We are also gradually adding links to YouTube videos of matches where available.

British wrestling on other channels

Listings for 'World of Sport' reruns on The Wrestling Channel

You can now search the listings, for example for a particular wrestler or venue.

Other information on the site includes:

Articles from the TV Times that mention wrestling.

Details of wrestlers who used more than one ring name

An overview timline on British wrestling broadcast schedules on ITV

Details of wrestling championships during the ITV years

Details of viewing figures and TV ratings for British wrestling

For more information on British wrestling during the TV era, we highly recommend the Wrestling Heritage website.

You may be interested in the book Have A Good Week... Till Next Week by John Lister, which covers British wrestling past and present.

Please e-mail any corrections, additions or suggestions. This site was last updated on 6/8/20.